WI-FI 6: THE MOST ANTICIPATED ARRIVAL SINCE THE NEWEST STAR WARS MOVIE

Of all advancements happening in the Wireless sector, nothing is the talk of the town like Wi-Fi 6 – The Next Generation’ of Wireless.

Also known as High Efficiency Wireless, 6 (technical term 802.11ax) is one of two specification standards for wireless network transmissions scheduled to be ratified in 3Q 2019.  Wi-Fi 6 brings enhancements to both the 2.4 GHz and 5.0 GHz frequency bands; its predecessor, 802.11ac, only ran on 5.0 GHz.  Other improvements include increased throughput speeds – rumored to be up to 4 times faster than its predecessor – greater efficiencies in supporting densely populated environments, and improvements to technology that decreases battery drain on mobile devices that are Wi-Fi 6 compatible. 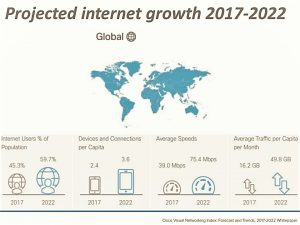 WHY SUCH A CRITICAL NEED FOR WI-FI 6?

Before we dive into the benefits Wi-Fi 6 will bring to the worldwide computer usage table, let’s first set that table with a few facts that emphasize the need for faster and more efficient Wi-Fi.  According to a 2017 MediaPost article, a networking index forecast by TEC’s partner Cisco placed the average North American consumer with eight internet-connected network devices in 2016.  Cisco’s projection by 2021?  Thirteen devices – a +63% increase.  Other projections are even higher;  CIO.com predicted that (with IoT devices as the catalyst) households will average as many as 50 by 2020. 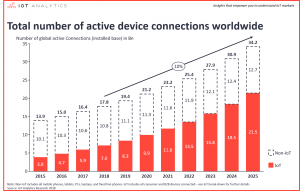 One of Wi-Fi 6’s key design features allow wireless access points to transmit information more efficiently to more devices while also ministering less battery drain to idle clients.  A Wi-Fi 6 AP can compress more data into each transmission it sends – which allows the AP to 1) communicate with more devices than before, 2) do so more quickly, and 3) do so more reliably by distributing each individual signal among multiple devices and carrying them with a singular transmission.  When coupled with a network switch that supports Multi-Gigabit (mGig) port speeds, Wi-Fi 6 APs can provide mGig speeds (between 4.8 – 9.6 Gbps) to wireless clients as well. In short, Wi-Fi 6 will give APs the capacity to serve numerous clients simultaneously within a single channel – providing significantly higher throughput speeds, reduced latency, and better battery life.

THE NAME OF THE GAME: DENSITY

With Wi-Fi’s continued omnipresence comes a number of devices and the bandwidth those devices demand, both checking in at a record-breaking pace.  This increased demand for connectivity can put a heavy strain on wireless options and adding access points is not the simple fix.  Therefore, wireless LAN standards need to adapt for greater density coverage design.

While increased speed is surely a fundamental benefit for a multi-device user, where Wi-Fi 6’s attributes really pay off is in high-density environments – typically defined as 30-50 users connecting to a single AP.  However, a single Wi-Fi 6 AP can handle 100-200 devices without a diminished experience.  This is a benefit that large office complexes/campuses, exhibit/trade show halls, auditoriums, theaters, casinos, arenas and stadiums will find especially valuable.

INCREASED SPEED FOR A DEMANDING WORLD

Now Wi-Fi 6 is poised to take things up another notch.  With expected throughout between 4.8 and 9.6 Gbps, Wi-Fi 6 seeks to enhance performance in Wireless LAN deployments in dense scenarios with 1024 QAM.  Like getting a better picture on your TV by having more pixels on your screen, you get more data over Wi-Fi by having more bits in each quadrant. With a higher Quadrature Amplitude Modulation (QAM) scheme, higher data rates can be transmitted faster and handled more efficiently.

Although bandwidth (from a density and throughput standpoint) is an absolutely critical metric for today’s wireless advancements, increased throughput speed continues to be important.  Industry projections vary, but there seems to be a consensus that Wi-Fi 6 will lead to +30% to +50% faster data transmission speeds on average vs. 802.11ac.  Additionally, Wi-Fi 6 users should also see a significant upgrade in speeds within facilities containing a high concentration of devices.  In environments with only a handful of devices (i.e. small business, personal home, etc.), the difference in speed might not be quite as drastic.  One important caveat: you may need to inquire with your IT partner regarding which access layer switches that will support the speed (and other) benefits that 6 offers.

This benefit should induce smiles across every user:  Wi-Fi 6 inherently enhances the battery life of devices.  As 6 allows client devices that are not actively communicating to define a specific time (or set of times) for specific APs to access information (a function called Target Wake Time), it reduces the amount of time its antennae need to be powered on to search for signals and transmit data.  Allowing the device to keep sleeping and save battery life. With TWT, devices can remain asleep for hours, even days, as opposed to waking every 100 milliseconds in old standards.

In 2017, Wi-Fi underwent its biggest security upgrade in over a decade with the introduction of the WPA3 protocol that replaced the WPA2 that was in use since 2004.  WPA3 makes it harder for cyberthieves to infiltrate passwords by repeatedly guessing them, and goes a step further by limiting the viewable data even if hackers manage to access it.  Today’s devices and routers are WPA3-compatible, but at this point that feature is merely optional.  As updated Wi-Fi 6 products are released, however, WPA3 will be required for Wi-Fi Alliance certification, meaning most new devices should include the heightened security measures. 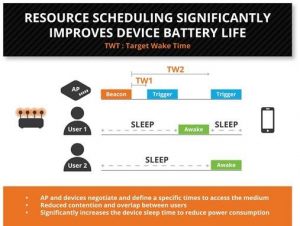 The Wi -Fi Alliance has announced that it will start offering Wi-Fi 6-certified devices starting in the third quarter of 2019 – which means the first offerings should be right around the corner.  For instance, Cisco is already well underway in preparation for Wi-Fi 6’s arrival, starting with 6-compatible MR45 and MR55 Access Points and mGig switches.  Additionally, cell phone providers (with the Samsung Galaxy S10 leading the charge) are moving towards phones to support this new generation of Wi-Fi. Large-scale industry introduction with compatible clients is slated for the first half of 2020. That said, it will likely still be a while before the majority of 6-supported devices hit the market. However, WiFi 6 Access Points are still backwards-compatible with all devices running older Wi-Fi standards – which still makes the investment a wise one.  Read Cisco’s take on strategically timing your Wi-Fi 6 investments, as well as an upcoming September 17 2019 Cisco webinar covering what you need to know to prepare for Wi-Fi 6.

TEC Communications is a Cleveland-based Cisco Premier Certified Partner – in fact, the first Cisco technology partner in Northern Ohio – and trusted IT solutions provider celebrating its 40th Anniversary in 2019.  Go to https://tec4it.com or call us at 440.333.5903 to find out how TEC Communications can help you move the most traffic across your network, so you can get more done for lower cost.

Drummer and fantasy football fanatic Alex is TEC Communications’ Systems Engineer, and the company’s resident Video-Voice-Messaging Collaboration and Wireless & Mobility specialist. He’s getting married in 2021, and can’t stand the taste or smell of popcorn. (Those traits are not necessarily related.)