On January 3, 2018 researchers disclosed three vulnerabilities that take advantage of the implementation of speculative execution of instructions on many modern microprocessor architectures to perform side-channel information disclosure attacks. These vulnerabilities could allow an unprivileged local attacker, in specific circumstances, to read privileged memory belonging to other processes or memory allocated to the operating system kernel.

In order to exploit any of these vulnerabilities, an attacker must be able to run crafted code on an affected device. Although, the underlying CPU and OS combination in a product may be affected by these vulnerabilities, the majority of Cisco products are closed systems that do not allow customers to run custom code on the device, and thus are not vulnerable. There is no vector to exploit them. Only Cisco devices that are found to allow the customer to execute their customized code side-by-side with the Cisco code on the same microprocessor are considered vulnerable.

A Cisco product that may be deployed as a virtual machine or a container, even while not being directly affected by any of these vulnerabilities, could be targeted by such attacks if the hosting environment is vulnerable. TEC recommends customers harden their virtual environment and to ensure that all security updates are installed.

Cisco is investigating its product line to determine which products may be affected by these vulnerabilities. As the investigation progresses, Cisco will update their advisory with information about affected products, including the Cisco bug ID for each affected product. 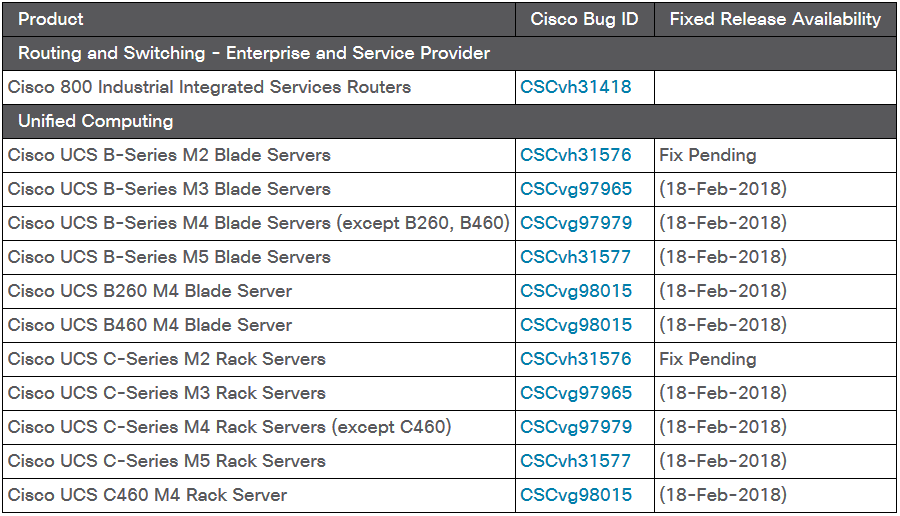 Full details are available at the following links: https://tools.cisco.com/security/center/content/CiscoSecurityAdvisory/cisco-sa-20180104-cpusidechannel

TEC Marketing
Check Our Content on These Categories!
Subscribe by email
Stay up on cybersecurity, advances in data center tech, and what's happening in the world of enterprise IT. Straight from our in-house Cisco experts!
Follow us on Twitter
My Tweets
TEC Communications Chat